Iowa and back to Germany

So here we are, trying to figure out this enormous dog, or is it a dog? Mom finally told us this thing is a horse. What ever it is, it sure talks funny. We were told a horse is a horse and what does Mom do? She hums a song. Here are the lyrics to it 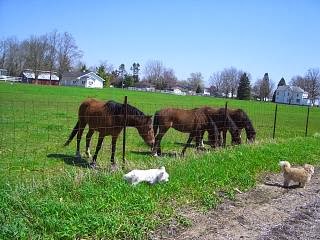 Well to make a long story short, I really don't like those things.
We stayed about a month in Iowa, then Mom told me it's time to go back to Germany and we are taking Buddy with us. So what did we have to do? Back to the Vet-man for Buddy for shots, health certificate and check up to make sure he is ok to go. Buddy was a rescue too, just like Scooter and Luna. Mom got him at the local Vet's office when he was about a year old. I thought Buddy would be able to fly in the cabin with us, but I was told he is too big and he has to go down to where the luggage is. I felt so sorry for my brother. But when we got to the plane, the Lufthansa pilot greeted Mom and told her that he made sure the temperature was up and that he would be checking on him during the flight. It was good weather all the way and we made it back to Düsseldorf ok. I sure missed Dad while we were in Iowa. Now I had to show Buddy the ropes there. Did you know the German dogs bark differently? That is what Buddy told me anyway. Don't know if I should believe him or not, since I am a bi-lingual Westie.
Buddy didn't know what to think of the Apartment on the 5th floor and no grass outside. He was used to running outside in the garden, chase squirrels and not be on the leash. Here we are in Germany in our Apartment 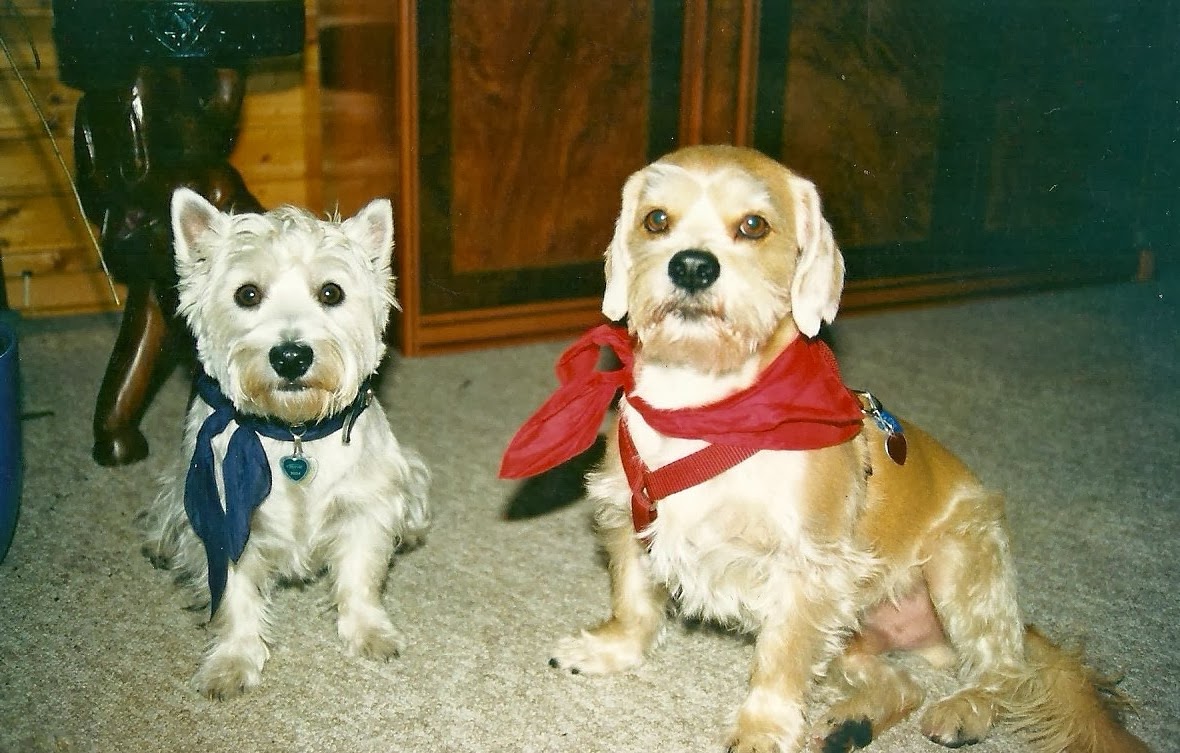 We were lucky, the owner of the Apartment building lived on the 2nd floor and he really liked us. He even hung a big picture of us in the Stairwell of the Apartment building.. When Mom and Dad went somewhere we got to go and visit him.I educated Buddy about walking on the leash, and the ducks and geese and Swans we visited, since he never got to see a swan or a duck before.He was use to squirrels but not those big white things that come after you and bite. Boy did I have my fun. 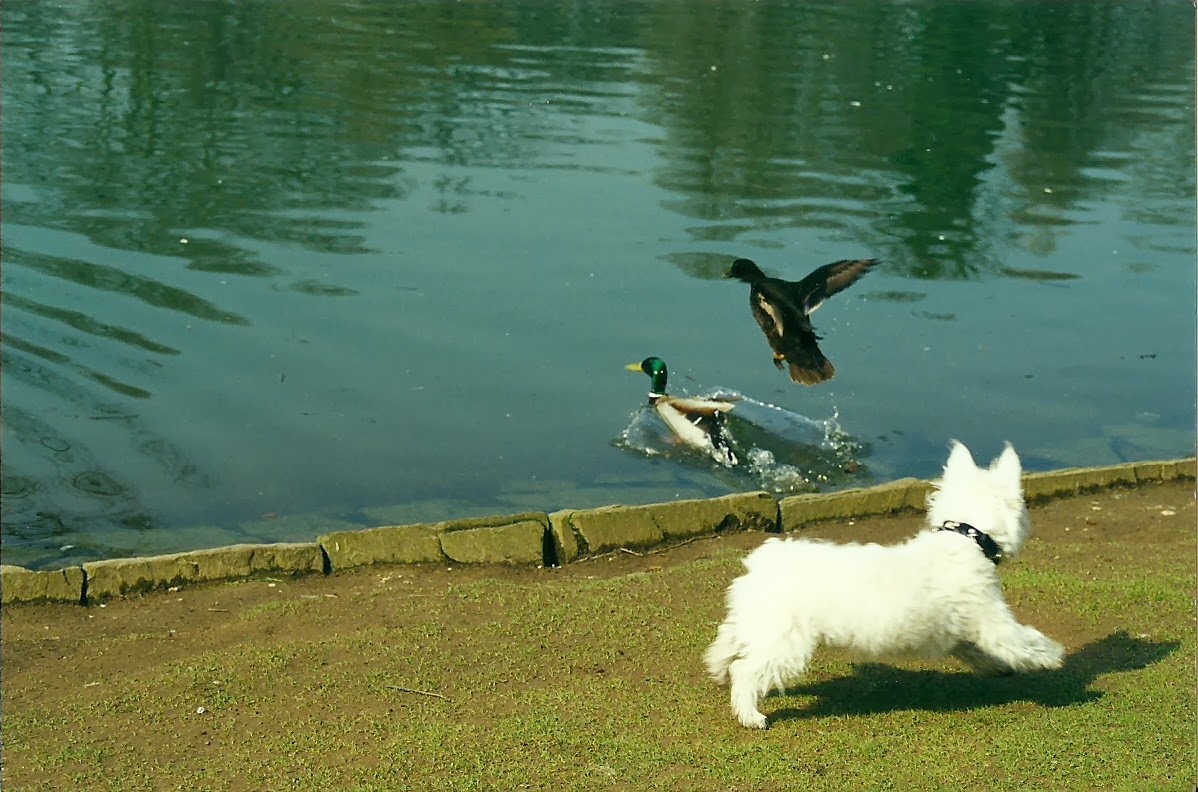 One day it was time again to go to Munich by train. Wise Westie that I am, I had to teach this Iowa bumpkin about some train-etiquette.We sniffed out our compartment and I made myself comfortable on the seat.I told him this was a compartment for 6 people ( or 4 people and 2 doggies) and not to make himself so wide since we have to leave room for 2 more. He finally got the Idea  and we traveled the 6 hours to Munich. Once at the Train station we had to take the Subway to Oma's house. I told him to watch his tail on the subway since those doors close real fast and I didn't want to have the embarrassment of having a flat tailed brother running around with me. I guess he got the idea since we never had a problems in the U-Bahn, that's what they called the subway in Germany. Oma was real happy to see us, but she told me that I was her favorite. Here I am with Oma in Munich 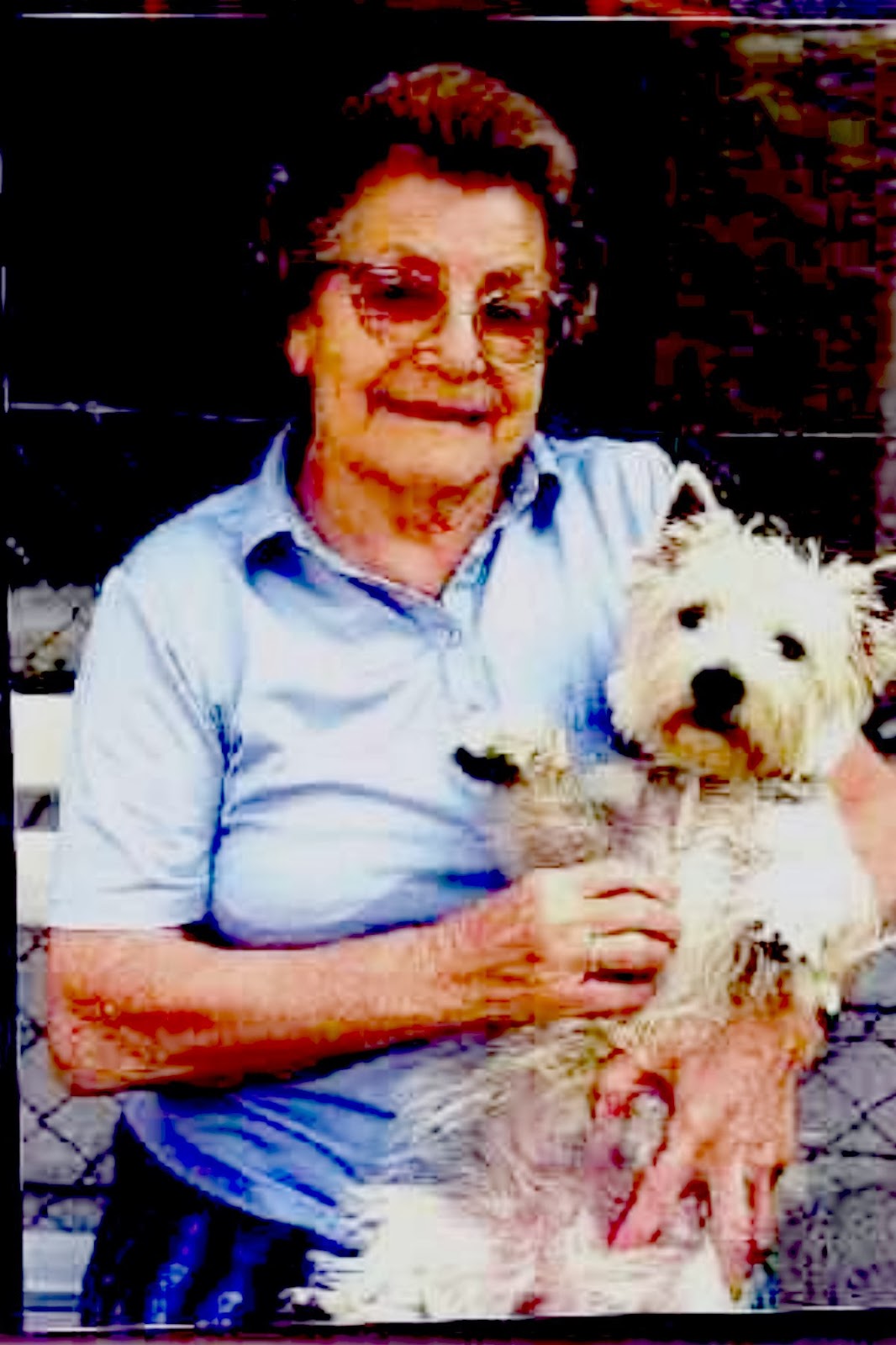 Not a very flattering picture of me, but that is all we have. We had the life of Riley there. Every time Oma went shopping at the butcher shop she bought us some hot dog or sausage or something else. The Butcher always saved something for us. Soon it was time to pack our things again to return to Düsseldorf. I always brought along allot of toys, but Buddy only needed one, his Elephant. Wherever we went that thing went along. I was even gracious enough to share my toys with him, but the only thing he wanted was this stinking elephant. Here he is with his priced  possession 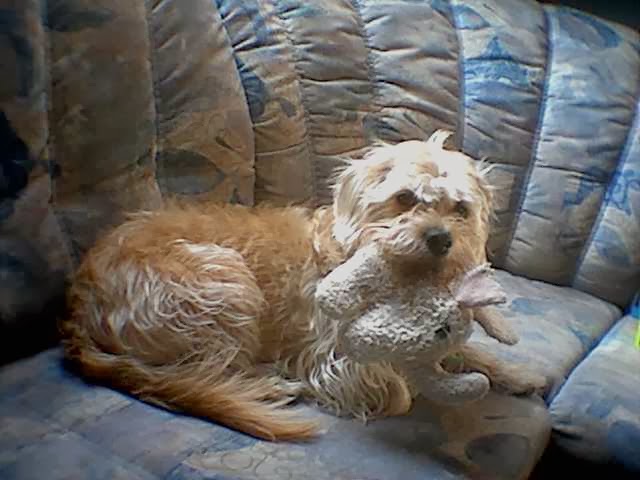 I don't know how often Mom had to wash it because it stunk to high heaven after a couple of weeks. But I guess it was easy to travel, have Elephant, will travel.
Back in Düsseldorf Mom and Dad had a surprise for me. They had bought a new DVD. It is called Asterix and Obelix and it had a Westie named Idefix in it. I went ape when I heard the music start to this film. To this day this is my favorite movie. Now a days I can't hear very good anymore and I don't run to the TV when the music starts, but I can still see him and I jump up. Here I am trying to talk to Idefix on TV
I used to run around trying to find him behind the TV. Mom always put a chair in front of the TV for me when she played the movie, so I could jump up. Buddy wouldn't care one way or the other. He got to be a real Daddy's boy. Followed him wherever he went, went to work with Dad. We could always come along as it only was a few streets over where Dad had his Office and since he was the Boss he could bring us along. One day Mom told us we are moving again, and this time to Italy. What in the SAM hill is Italy?

Find out in the next blog.
See you in Italy

your friend Dagobert
Posted by Elefanterl at 2:04 PM 2 comments: