Well, here it is Sunday already and this is only my 2nd blog. I hope everybody enjoyed the first one , so here the story continues.

After Mom and Dad got me in Plattling we had to go on the Train to get to Munich. Since it was Christmas Eve, none of the stores where opened, so I guess that started me thinking I was more Human than pup. I didn't have a collar and I got to ride on Mom's lap all the way. When we got home (I was real good and didn't pee pee once) I got to eat out of a fancy porcelain bowl and got to sleep with Mom on her bed. Life is starting off OK for me. We stayed in Munich for a few Days and then went back on a Train. This time to Düsseldorf, which is on the Rhine river. They never told me we lived on the 5th floor in an Apartment building without an Elevator. My little legs where just to short to hop on the stairs, so I got carried until I was big  enough.But Mom was always a little sad about her Pup she left back in the USA with her Girlfriend.. She told me his name was Buddy and he was brown and a little bigger than me. But she also said that we will get him in Iowa when I get to be a little bigger.In the mean time I enjoyed going for walks over to the Park where they had lots of ducks and Geese. They where allot of fun to chase, that is as much fun as you can have on a long leash. The smells where wonderful and I got to meet lots of other "non humans" ( I guess you call us  "Dogs"), but for me I was closer to being Human. Our walks took us over to the Rhine River which I thought was amazing. There on the "Rhine Promenade" where many Westies. I got to bark with them and occasionally have a little Westie Wresteling 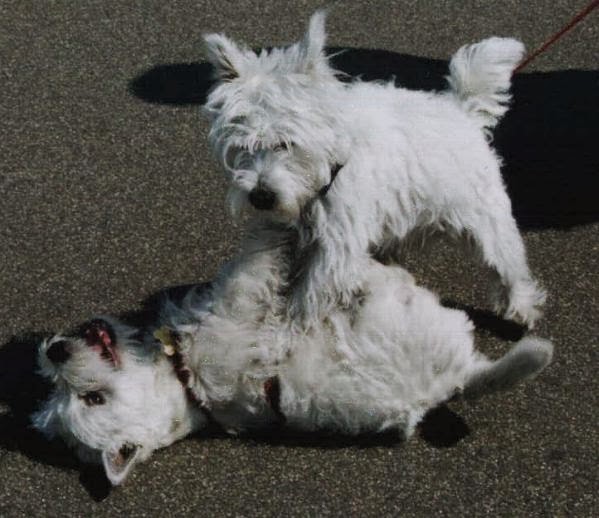 Then came the day I was brought to a strange place. Mom called it the "Groomers". She said it is just like going to the Beauty shop, which I did regularly with her.What in the blue blazes did this Lady do to me. She called it stripping. OUCH!! Well I found out that I was born without an undercoat like most Westies. It never really got that cold in Düsseldorf, so I didn't need a coat. But she cut allot of my nice long fur off. Wonder how she would like it if she had to run around half " nekid".
Well now Mom said I looked more "Westie like", whatever that meant. We walked on the "Kö" that is what the people in Düsseldorf called the Königs Allee, where all the fancy shops like Gucci, Abercrombie & Fitch, Armani etc. are. Well you get the idea. I was strutting my stuff and couldn't believe my eyes. My fellow Westies were wearing more "Bling" than any I ever seen. I guess I have to have a talk with my Mom so I can be like them. How is a handsome Westie like me supposed to get a Lady without Bling?. And let me tell you, I was all still whole. But not for long as I soon was going to find out.
The day came when all of that changed. I been to the "Vetman" before for my shots, so I didn't mind going there again. He was a friend of Mom and Dad's and came to visit every once in a while, so I knew him a little. But that day was different. There was no water bowl here in the morning and I asked Mom in not such a quiet voice what's up. She just said we have to go visit and I be OK. Once we were there at the Vetman's I thought something was strange. There were no other pups or Kitties in the waiting area. We went in another room and I got a shot. Let me tell you, that was some shot. The world started spinning, Mom started to look funny and that was all she wrote.What I didn't know, was that Mom assisted the Vetman and took away my "Family jewels". You see Mom worked for a Vet before and helped with many of those surgeries. When I woke up I was back in my little bed and my tummy was hurting. I started to lick myself, and what do you think I found? I was without my "Manhood". She had the gall to cut my testicles and left me "bare ass" naked. I will never forgive her for that. From that day on I clung to Dad allot more.
I scared him real good one day. As we were walking along the Rhine River I noticed some Ducks. Mom had decided to sit on the Rocks along the Rhine and let me of my leash to explore.Those ducks were swimming so nice and I decided to dive in after them. Little did I know how deep the River was and I learned how to swim real fast. I was in my Element when I heard Mom scream "Dagobert is drowning". Dad took his socks and shoes of, so did Mom trying to rescue me. Boy was that ever a funny site. But I just swam back to shore and walked out of the Water. Mom had slipped and fell and was sitting on the rocks and I just wandered up to her, shook my fur, like any decent Westie would do, and sat down. Boy, did I ever get a talking to, and that was the last time I was off leash on the Rhine River. 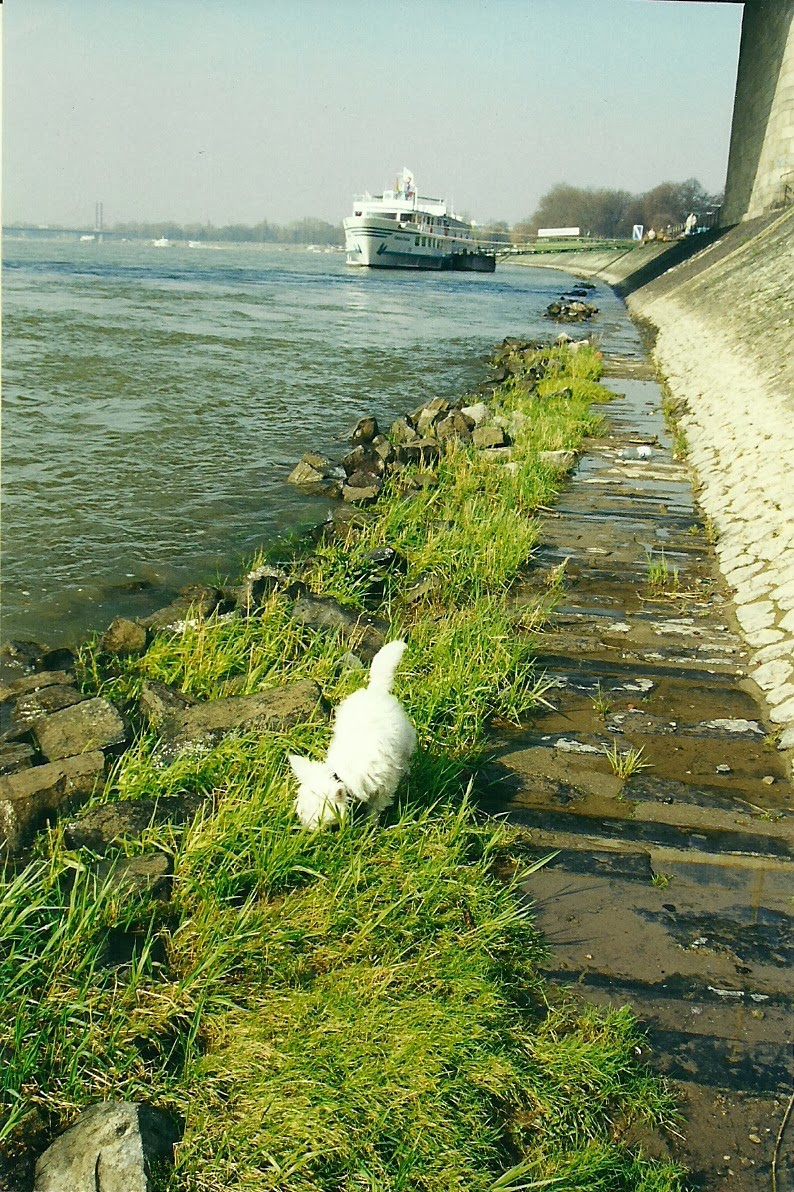 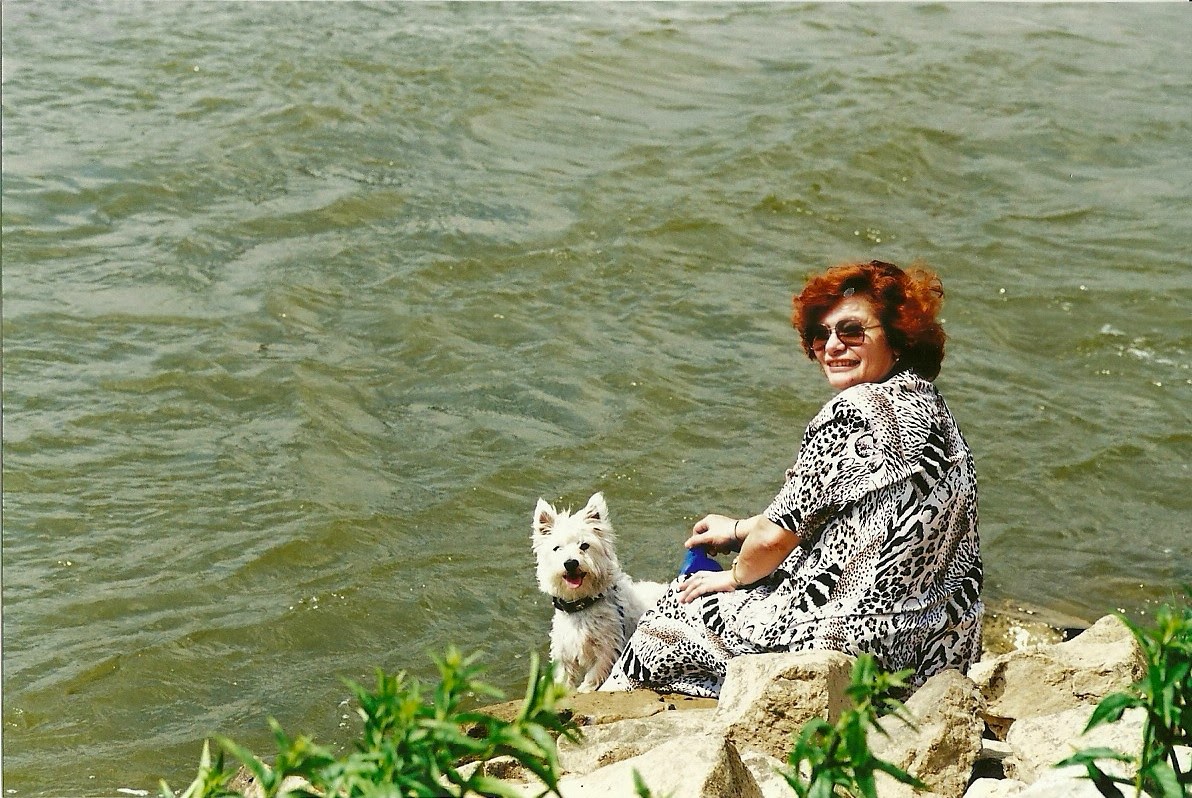 More Adventures in my next Blog
Your Storyteller
Dagobert

Posted by Elefanterl at 3:30 PM